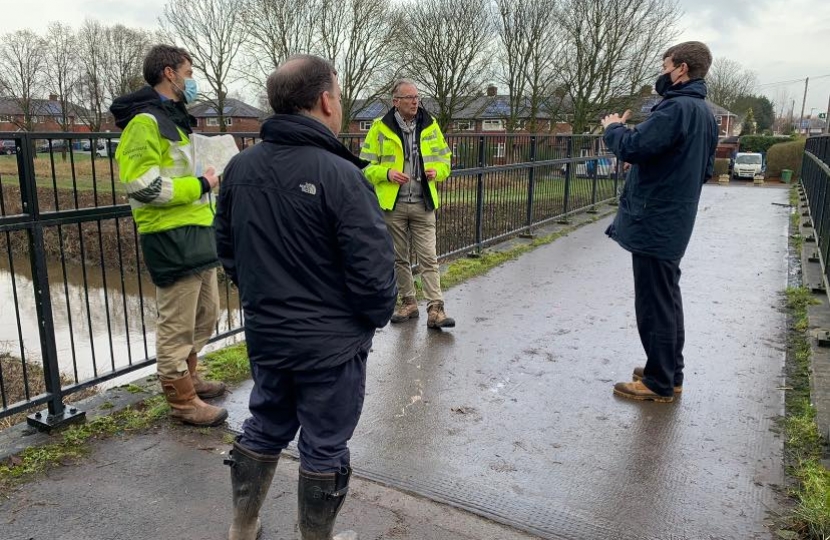 Storm Christoph left a trail of devastation across our town, most of us had seen nothing quite like this before, filthy water entering homes and businesses, cars written-off and sentimental personal possessions destroyed.  The frightening impact of a torrential storm leaves a lasting impact and it will take time to recover even with the support of neighbours, families and our wider community supporting one another, more so than ever during this time of crisis.  I want to say a particular thank you to the emergency service teams who were as brilliant as ever, volunteers and charity groups who’ve come forward to help, businesses large and small such as Mike at the Nisa Store in Dallam and Eddie Stobart who, despite having to deal with massive impact of flooding at their warehouse, have supported the local community with donations and practical help.

In Sankey Bridges I met a lady who, as well as being evacuated from her bungalow due to flooding, returned the following day to discover she had been burgled and her valuables taken.  Her immediate priority to was to have electricity restored safely in her home and I want to give a mention to Stuart Goodfellow and his team from Electrical Solutions in Warrington who responded to my Facebook appeal for help – going beyond the call with their support locally, thank you from me and the residents you’ve helped!

The focus now also turns to ensuring that lessons are learnt, and action taken to prevent this type of things happening again.  Sadly, for some families close the River Bollin in Lymm, this is the second time in less than 18 months that they’ve had to move out because their homes have been deluged with flood water. Getting the Environment Agency and Council to take action is now a priority. When politicians can work together for the benefit of our area we must, so this week myself, Charlotte Nicholls MP and MP colleagues from across Cheshire have written to the Secretary of State to ask him to release urgent funding. The Government has confirmed a further £5.2 billion of investment over the next six years to cover flood defences nationwide, we need investment here in Warrington.  We also need to think more practically about things like the flood insurance, we must also improve the availability and affordability of flood cover for Warrington households at high flood risk.

If you’re over 70 and not yet had a vaccination, now is the time to contact the NHS on 119 to arrange a time to get your covid jab. I’ve had the chance to meet some of the GPs, nurses, pharmacists and volunteers working at the vaccination centres in Warrington over the last few weeks, their speed and efficiency is incredible, they’re now well over 40,000 vaccinations, and we look to be on track to achieve the goal set out by the Prime Minister of providing the first dose to the four primary categories by the end of this week. We are moving in the right direction at lightning speed, but doing so in a way that we can protect those most at risk. Many people have also contacted me about the need to vaccinate teachers and those other professions who are providing essential public services and I have some sympathy with these requests.  I am particularly keen to see schools re-open as soon as possible.  The challenge of home schooling for working parents alongside the impact not being at school has on youngsters means re-opening schools must remain a national priority.

This week is National Apprenticeship week and over the last 10 years more than 10,000 apprenticeships have been created in Warrington South. Young people being taught practical skills combined with college-based learning in a massive variety of sectors. We’ve seen some brilliant success stories where students, taken on as apprentices fifteen years ago are now playing leading roles in businesses in our local area, recruiting more apprentices and extending the scope of the programme to cover more roles.  I’m keen to highlight the work of companies who are recruiting young people so please drop me a line if you’ve got vacancies.

Finally, last week I paid tribute to Captain Sir Tom Moore in the House of Commons following the news he had passed away. I’m sure I speak for everyone in Warrington when I say he encapsulated everything that is great about the British spirit, he brought hope at a time when the nation needed some positive news with his incredible achievements. I have sent my deepest condolences to his family and all who knew him.

Andy is calling on all export companies in Warrington South

The MP for Warrington South is leading a drive to bring free government support to more local firms in Warrington to help them take advantage of export opportunities and to tap into demand for British products from overseas.