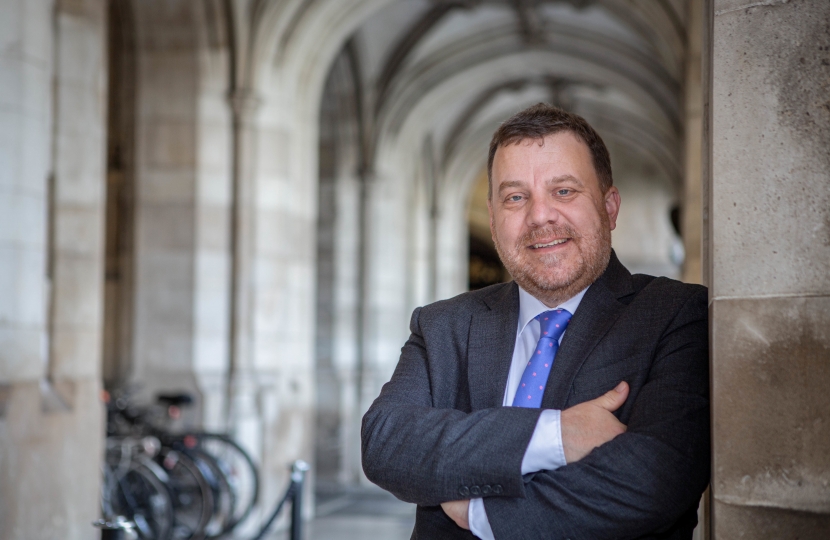 Andy is the Conservative Member of Parliament for the Warrington South constituency.

Born in 1974, Andy and his wife Aggie, who works in the family business, live in the village of Lymm.

They have a son Harry and have lived in Warrington for 11 years, moving to the Borough just two weeks after Harry was born.  Completing the family are ‘Monty’ and ‘Pablo’, cocker spaniels who are often out with Andy in the constituency.

Andy was educated at Worksop College in Nottinghamshire from there he went to University in Leicester where he read Economics.  In 2011 he attended the renowned Wharton Business School at the University of Pennsylvania.

His early career was as a radio journalist having spent time with the Commercial radio stations around the UK, reporting and reading the news.  During the late 1990s Andy worked on many successful applications to the regulator to launch and run new commercial radio licenses in towns and cities across the UK.  He built the business from the ground up, learning every aspect of the commercial operation as well as being ‘on air’ as an award-winning journalist.

Andy played an instrumental role in the launch of Smooth Radio around the UK, based at MediaCity in Salford he worked with teams in London, Birmingham, Manchester, Glasgow, Newcastle and Nottingham and in 2010 he became the Group MD.

In 2014 Andy left radio to launch his own consultancy business, working with retailers to grow their private-label ranges and introducing new brands to the UK.

Alongside work in business, Andy has spent time as the Deputy Chair of Warrington and is a Parish Councillor in Lymm.  He is also a Multi-Academy Trustee and Chair of a Regional Advisory Board on Alternative Provision in Education.  He sits as a Magistrate on the Merseyside Bench.

An enthusiastic spectator (as opposed to player!), Andy’s a regular at Old Trafford watching both Cricket and Man Utd but is most often found on the touchline of the U12s pitch, supporting his son Harry who plays junior football most weekends.

In March 2019, Andy was selected as the Parliamentary Candidate for the marginal Warrington South constituency, hoping to overturn the Labour majority of just 2,459.

In the early hours of Friday 13th December 2019 Andy was elected as the new Conservative MP for Warrington South with a majority of 2010.