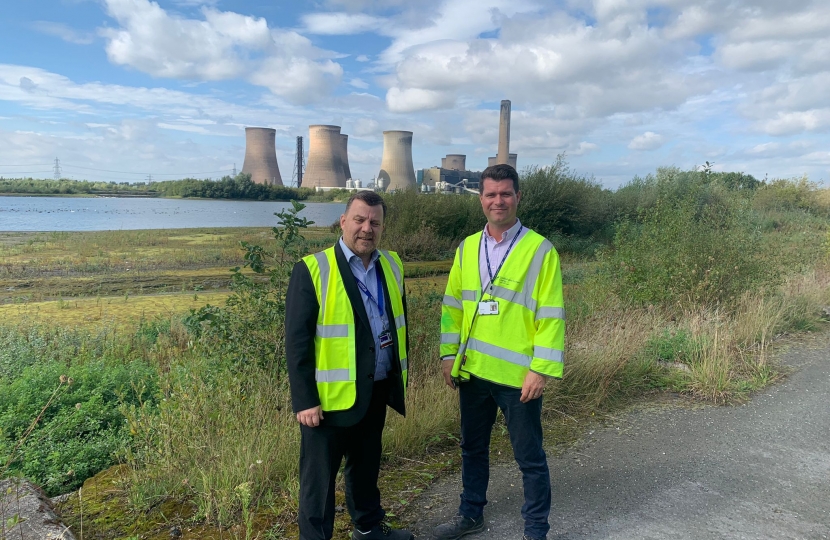 Mr Carter recently visited the site to see for himself the areas that will be included in the plan, meeting with the owners of the site, SSE, who are responsible for the demolition of the turbine hall and colling towers.

The sites inclusion in the Council’s Draft Local Plan comes after years of campaigning from Andy, who wants to see Brownfield sites such as Fiddlers Ferry be prioritised over building on the green belt.

Fiddlers Ferry is a vast area, and travelling across the site there’s already a huge amount of demolition and remediation work taking place and work has already begun to clear the ash piles where homes and businesses can be built.

One of the benefits to using this site over others is that Fiddlers Ferry access to railway connections with a line which is currently used only for freight.  Linking homes with good public transport infrastructure is really important.  Any plans need to ensure that there is the necessary infrastructure for schools, GPs and community centres.  I’m very pleased to see that these outline proposals would protect the lagoons as part of a nature park as well as allowing them to be used for activities such as sailing.

Warrington Borough Council will launch a 6-week consultation in early October into the draft local plan and I would encourage residents to look carefully at what’s being proposed by the council as these plans are going to impact on all our lives .

The site will undergo major remediation works which will see the demolition and removal of the power station and its eight cooling towers that has dominated the local skyline for generations. In its place will arise a new employment hub and two new urban villages set within an extensive parkland landscape, that will engage sensitively with the Mersey riverside and link with the Widnes Waterfront area.

You can view the plans yourself by visiting the Councils website at: www.warrington.gov.uk/localplandocuments.

The death of South End West MP Sir David Amess has left a hole in our country and at the centre of our democracy.