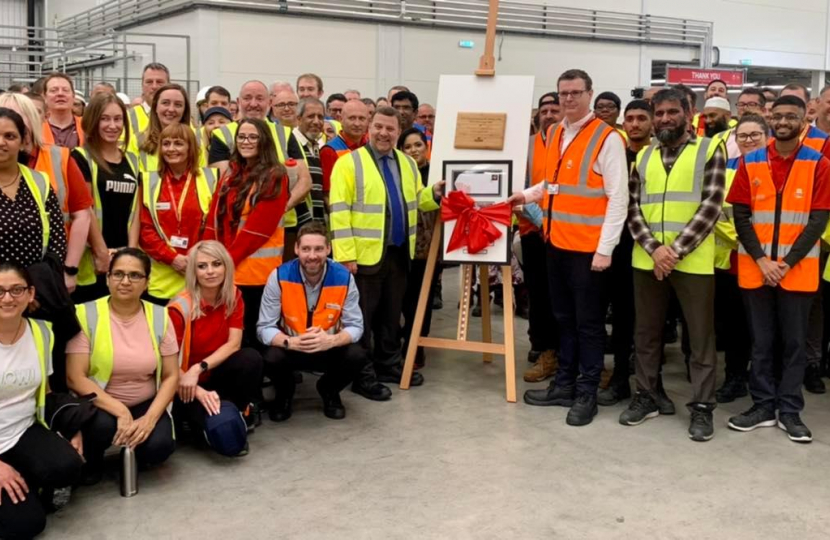 Officially opened by Warrington South MP Andy Carter, the Super Hub measures 32,000m2 – equivalent to 4.5 football pitches – and can sort up to 40,000 items an hour.

The huge new facility will operate seven days a week and houses the latest scanning, sorting and tracking technology.

With domestic parcel volumes up more than 30% compared to pre-pandemic levels, it will support customer’s growing demands for next day delivery and delivery of larger items.

The Super Hub represents a significant investment in the North West by Royal Mail. Located near major urban centres including Manchester and Liverpool, and the warehousing and fulfilment sites of online retailers, it will employ around 600 people at full capacity.

As part of Royal Mail’s Steps to Zero environmental plan to achieve average per parcel emissions of 50gCO2e and reach net zero by 2040, the Warrington hub is also home to a fleet of 20 bio-compressed natural gas (bio-CNG) HGVs, as part of a fleet of 80 vehicles across the business that will be fully operational by Spring 2023, which help reduce direct emissions by around 85% compared to their diesel equivalent.

Simon Thompson, CEO of Royal Mail, said: “Royal Mail is now a parcels business that also delivers letters. Our new parcels Super Hub will allow us to give consumers exactly what they want – being able to order products very late in the day to have them delivered the very next day, seven days a week.

“This is a giant step forward in our journey to 90% parcel automation by the end of next year. We can compete and win in the parcels market which will give our team the job security they deserve both today and tomorrow.”

Andy Carter MP said: “It’s been brilliant to officially open Royal Mail’s brand new Super Hub based here in Warrington today. The sheer size and scale of the place is so impressive – the facility is four and a half football pitches in size and able to sort up to 40,000 items per hour!

“Given the disruption of the pandemic and the increased demand for online ordering, it’s great to see Royal Mail investing in facilities fit to meet these challenges, as well as creating hundreds of jobs for local people in our region.”

Royal Mail is pursuing an ambitious programme of automation across the business. This year, it has installed six parcel sorting machines in mail centres across the country, including in Nottingham, Chester and Cardiff. Its Midlands Super Hub, based in Daventry, is on track to open in Summer 2023.

Warrington South MP Andy Carter has welcomed the Government's announcement that the controversial 'Golborne Link', the proposed connection from the HS2 network to the West Coast Main Line just south of Wigan, is to be dropped from the High Speed Rail (Crewe - Manchester) Bill.