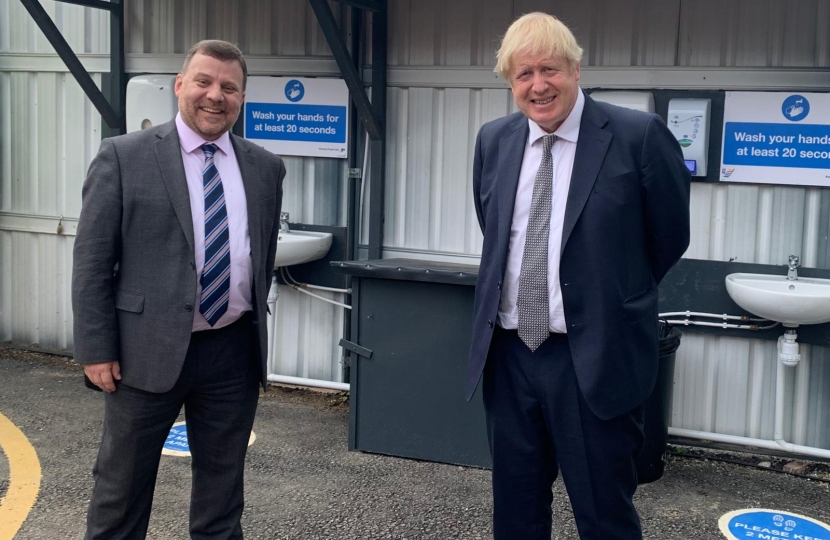 Prime Minister Boris Johnson has visited Warrington this afternoon. He made his way with Warrington South MP Andy Carter to land in Stretton, where Barratt Homes are building 180 homes after being selected by Homes England.

The visit comes as the Government announced an overhaul of the country’s outdated planning system that will deliver the high-quality, sustainable homes communities need will be at the heart of the most significant reforms to housing policy in decades.

The landmark changes will transform a system that has long been criticised for being too sluggish in providing housing for families, key workers and young people and too ineffectual in obligating developers to properly fund the infrastructure – such as schools, roads and GP surgeries – to support them.

Valued green spaces and Green Belt will continue to be protected for future generations, with the reforms allowing for more building on brownfield land.

I’m delighted the Prime Minister accepted my invitation to come to Warrington South today. He got to see for himself the difference that the planning reform proposals could have on the area, building better, quicker, and in the right places.

We got to lay some bricks at the Kings Quarter Barratt Homes development In Stretton. It was a chance to meet with apprentices who are learning skills and helping to build homes for families in Warrington.

Critically with today’s announcements, brownfield development will be prioritised, so we can make use of regeneration sites likes Fiddlers Ferry. Our current system makes it too difficult and slow to build on brownfield land which must change if we are to protect our precious green spaces.

I was pleased that the Prime Minister agreed to come back to Warrington again to take a look at the opportunity Fiddlers Ferry presents, and the potential that it could unleash alongside schemes such as Northern Powerhouse Rail so that we can truly level up.

Towns and high streets like here in Warrington will also benefit from renewed development. The reforms will speed up and simplify the process, breathing new life into vacant commercial properties and industrial spaces and, where desirable, transforming them into new homes.

At their heart, the proposals will ensure councils prioritise good design, establish strong, local guidance and create a fast-track for approving beautiful buildings. Under the plans, land will be designated into one of three categories - for growth, for renewal or for protection. Communities will set the agenda for their own areas, with the categories for all land across England decided through local consensus.

Decisions on the Green Belt will stay with local authorities as they prepare their plans, so that we can continue to protect and enhance these important areas for generations to come. Following the publication of Planning for the future, the government will now consult with planners, lawyers and local government experts on the proposals, as well as interest groups and residents.