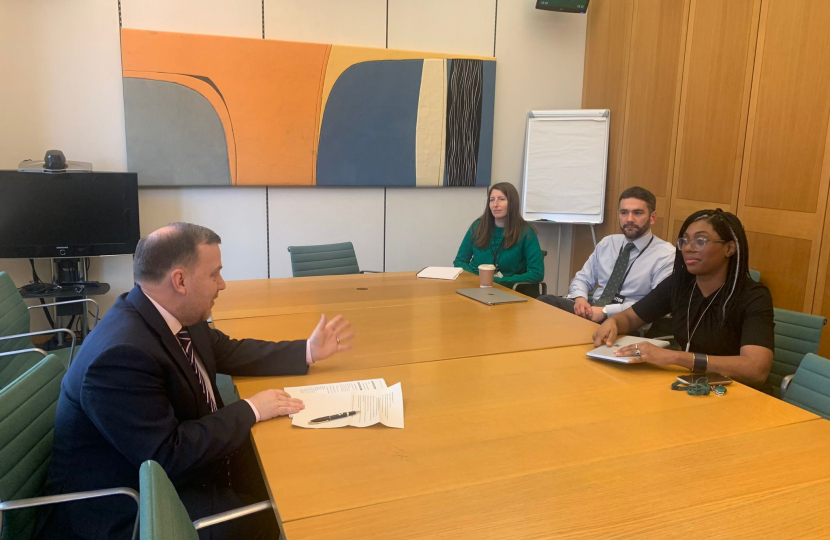 The Warrington South MP has publicly criticised the decision taken by the Labour controlled council to borrow more than £2billion to invest in banks, supermarkets and an energy company, with the latter entering administration earlier this year.

The news, confirmed in the Queen’s Speech, will also see the Department for Levelling Up, Housing and Communities working with a small number of Councils, that are already in a significantly risky position to reduce their exposure to risk. Warrington Borough Council is one of the local authorities officials will be working with.

Andy met with Ministers earlier this year to raise concerns about the Council’s failure to sign off accounts since 2017/18 as well as highlighting the failure of Together Energy which had received around £52m in public money. As part of legislative changes brought forward in the Levelling Up and Regeneration Bill, the Government announced its intention to expand existing statutory powers to ensure it has the necessary tools to tackle excessive risk.

Andy Carter MP said: “I’m very encouraged by the Minister’s confirmation that Government are taking action to stop reckless borrowing by Councils. There’s an over-reliance on commercial income to balance their budgets, and they’re pursuing too many novel ideas for which they have neither the experience nor expertise to manage the risks effectively, sadly as we’ve seen with Together Energy.

“Local Councils are not corporate lending houses. The legislation being introduced will still allow Councils to borrow to invest in new facilities such as leisure centres in their area, but it will safeguard the proper and proportionate borrowing bringing a halt to the situation we’ve seen locally where the Council are investing public money into private companies with the risk sitting at the door of local council tax payers.”

In a letter to the Warrington South MP, Minister Badenoch confirmed: “My officials will be working with a small number of councils, including Warrington Borough Council, with the aim of agreeing a plan for reducing the authority’s level of debt.

“I am of course mindful that the ability of local authorities to invest capital funds is important to the delivery of local priorities, for example around regeneration and housing.

“We therefore intend to work cooperatively and constructively with each of the councils, to agree a sensible and ambitious plan for reducing risk and debt, based on a reasonable timeframe.”