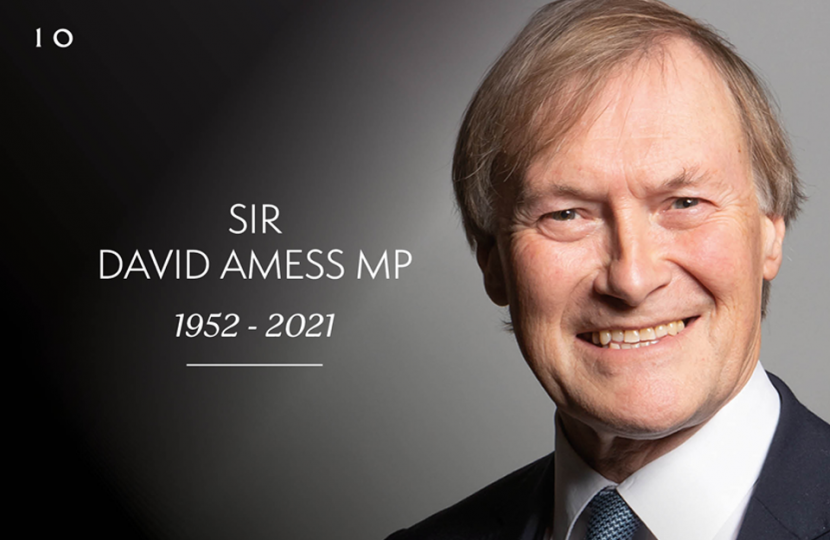 The death of South End West MP Sir David Amess has left a hole in our country and at the centre of our democracy. As someone with far less Parliamentary experience than Sir David he was someone I could look to for advice on dealing with bizarre rules in the House of Commons or how to help a constituent with a particular concern, after 38 years there wasn’t much he hadn’t come up against or tackled for a resident in Basildon or Southend. David though was far more than an encyclopaedia of protocols and processes, his approach to life was very much as so many of the tributes have said, diligence, kindness and compassion mixed with unfailing efforts to do his best.

To colleagues like myself, he was kind and helpful, never patronising but wise without any trace of pomposity. He could make you think, he could make you smile. After making my maiden speech he came to me in the Members’ Lobby, just outside the Chamber. His advice was that you’ll never please everyone, many will disagree with the work you do – but work hard, keep a sense of perspective and be kind. Advice that I think is helpful for all in politics.

It is a terrible irony that such a quintessentially committed constituency MP should have been killed whilst meeting constituents, people he was trying to help. One of the best things about being an MP is meeting your constituents, these are the people you represent in Parliament and it gives you a proper understanding of the issues and the sense of feeling, something I try to do most weekends. I don’t want to make changes to the way I work and campaign locally. If we arrive at a place where all MPs can only appear in public with security detail by their side, the terrorists will have won. We also need to make sure the staff who work in MPs offices are safe and also those members of the public who come to meet their MPs are safe.

Many will argue that we need to hard look at the way we carry out our political discourse. Few of us share exactly the same views on every topic and we all have the right to make our points and to be listened to with an appreciation that views are fairly held.  My mantra before entering Parliament was to make the case for positive politics, and it still is. This isn’t just a slogan; I genuinely believe in it. Many of the challenges we face in Warrington go beyond political boundaries where we work together, our campaign for a new hospital for example is something we all agree on and we’ve all worked together to make the case to Government for investment in our town.

Social media has in some cases exasperated hatred and threats not just in political narrative but also in the way we react to events in our communities – on local Facebook message groups, where aggression and hostility can sometimes overwhelm the positive interactions that we do have. Free speech must never be sacrificed but neither should it enable those with malicious intent or those that shout loudly and aggressively, to close down the views of others or to spread incorrect and misleading information.

Many of the people who post offensive comments online would never dream of saying the same in person and whilst legitimate criticism should never be blocked, it is wrong that this sort of behaviour continues and quite wrong that anybody, be they a doctor, teacher, shop worker or elected Politicians should face threats towards themselves and their families for doing their job.

We can learn from both Joe Cox and David Amess when we’re engaging with other, there is far more that unites us than divides us – and let’s practice being a little kinder to one another.