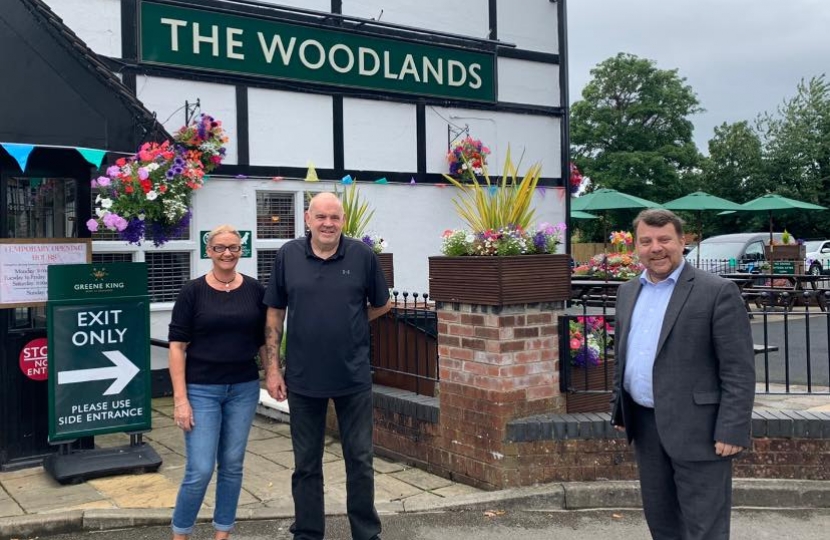 One of the best things about parliamentary recess is being able to spend time out in Warrington and villages and over the last few weeks I’ve had the real pleasure of meeting businesses and residents from every corner of the constituency, supporting their activities and raising the profile on many issues.

The Woodlands in Great Sankey kindly hosted me for one of my lunchtime surgery sessions, a chance to meet with local residents to discuss issues which matter to them, this particular one included issues such as the development at Omega West, leasehold reform, blue badge availability and plans for future of the Yacht Club at Fiddlers Ferry lagoons.  It was also great to meet Mr and Mrs Hinkins from Penketh who first contacted my office in March when they became stranded in New Zealand whilst travelling at the start of the Covid-19 lockdown. Having helped them return to the UK through the Foreign Office repatriation programme it was lovely to be able to put a face to a name and know they were back safely.

Since being elected I’ve been pushing Warrington’s need for better infrastructure with Minsters in Westminster at every opportunity. Finally, that activity has started to pay off. Last week Warrington Hospital received the very welcome news that it would get £4.3m to increase capacity and services at the hospital’s A&E department. Last November I invited the Health Secretary Matt Hancock to Warrington so that he could see for himself the pressures in our local casualty department.  The extra funding will mean the Hospital can extend the emergency department, adding more treatment cubicles, increasing the waiting areas, significantly remodelling children’s A&E and improving facilities. It’s what the Hospital Trust asked for and I’m pleased the Health Secretary has listened and taken action to award the funding. There’s also some additional capital funding agreed to address general maintenance at the hospital, and I’m continuing to push for further funding to secure a new hospital over the long term.

Earlier in the month over £5m worth of funding was announced for a new all electric bus depot at land off Bewsey Road. The new depot has already received planning permission and will involve the relocation of Warrington's Own Buses from its current site to a purpose-built new depot. This funding sits alongside a recently submitted bid for cash to transform the buses in Warrington into a greener, environmentally friendly ‘All Electric bus fleet’. It also means the land currently used to house the bus depot can be released for new homes development, town centre affordable housing, reducing the need to build on green belt.

Just before leaving Westminster for the summer I extended an invitation to the Prime Minister to come to Warrington South so he could hear from local people on how the Covid-19 restrictions were impacting on businesses and get a feel for the work we need to do across the north to level up.  To be fair, I wasn’t honestly expecting him to say he’d be heading up the M6 and calling in for tea, given his pretty hectic schedule.  But he did… last week it was a real pleasure to host the PM here in Warrington, to spend time talking about local issues, showing him the opportunity we have to regenerate Fiddlers Ferry and to also host a zoom call with hundreds of local residents who got to question the PM on issues which mattered to them.

Whilst on his visit, the Prime Minister was also able to present a special award to Macy Owen from Grappenhall for raising over £10,000 to buy treats and care packages for NHS staff and patients at Warrington Hospital by selling her handmade beaded rainbows. Her determination to help others is a shining example to us all, her rainbows have really captured interest and brightened so many homes, including 10 Downing Street.

Finally, a very brief word on A-Levels and GCSEs. It’s fair to say that there is no perfect way of assessing students’ grades where no formal end of study examinations has taken place, but having spent the weekend speaking to Head Teachers in Warrington, students, parents and Ministers it became increasingly clear to me that the algorithm being used by Ofqual had created a high number of anomalies which needed to be resolved quickly.

I gave this feedback to Minister last Sunday evening and particularly raised the issue of the timely nature of an appeals process, given the likelihood of a high number of valid cases. You will no doubt be aware of the decision taken by Ofqual earlier in the week to move to a system which uses Centre Assessed Grades. Covid-19 has impacted so much of our lives, we need schools to re-open in September, so that learning resumes and exams can follow next springtime.