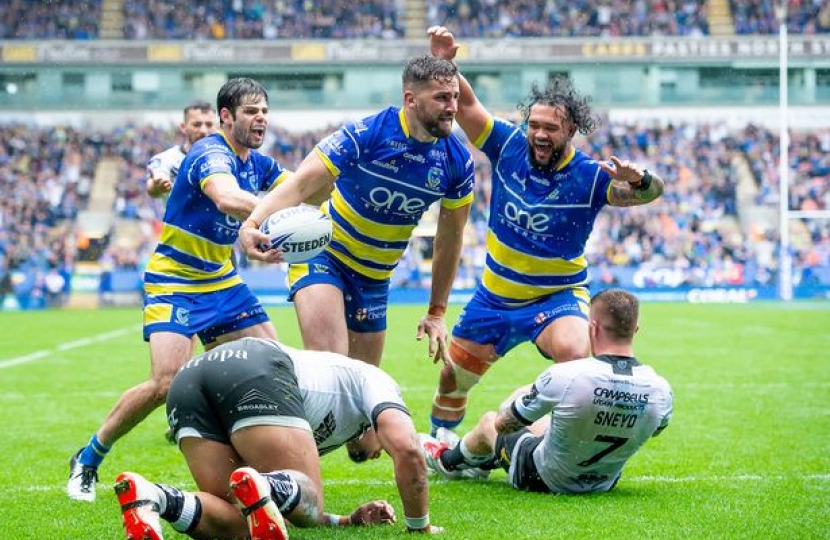 Rugby League has received a £12 million ‘Survival Package’ from the Government to help aid the sport during the Covid-19 pandemic.

The financial boost is a second loan the sport has received since the pandemic, having become the first sport to receive a loan from the government earlier in the year to the tune of £16 million.

It is part of £300 million support package issued by the government, which has seen rugby union receive £135 million.

Rugby League clubs like Warrington Wolves have worked really hard to complete Challenge Cup and Super League competitions – but have been playing most of the season without being able to have crowds in the grounds, which has been a massive strain.

2021 is a huge year for Rugby League with three World Cups – men’s, women’s and wheelchair – a major international event coming to England and mostly the north of England, which can be a huge part of the national recovery post-Covid.

Andy Carter has welcomed the funding and has called on the sports Minister to look at what further provisions could be made ahead of next year’s World Cup. The MP for Warrington South has also called on the Government to set out a criteria for getting spectators back in stadiums.

Commenting on the announcement, Andy said:

This further £12m of funding for Rugby League is most welcome, it shows that the Government recognises the importance of the sport and its social impact in our communities.

Clubs like Warrington Wolves don’t just put on good performances, they make up a big part of the fabric of our community in the Town, supporting local charities and engaging with the young and disadvantaged.

I’ve said before that Rugby League needs to be part of our levelling up agenda in the North, and I’ll continue to push Ministers on setting out a criteria for getting spectators back in the grounds. The immediate financial support is great, but we also need to look ahead to the World Cup next year and how we can welcome people back into the stands.