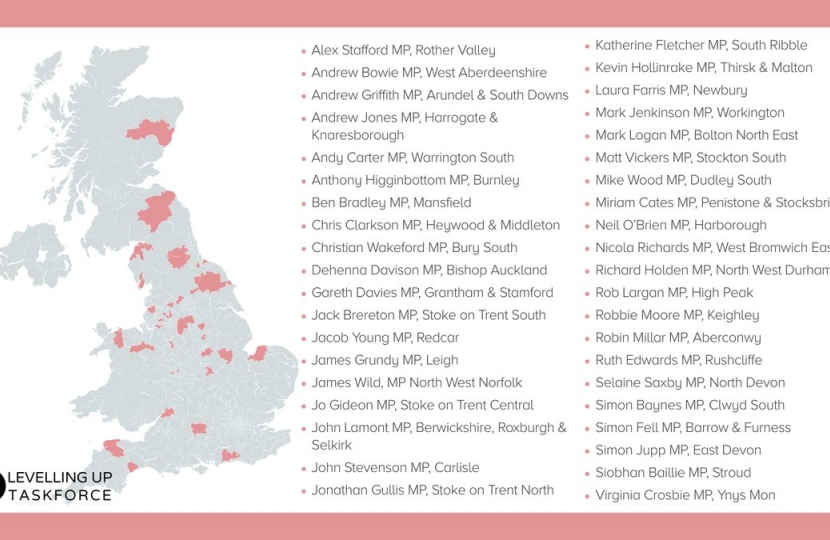 MP for Warrington South Andy Carter has joined a group of 30 Conservative MPs to help spearhead the Government’s “levelling up” agenda. The Levelling Up Taskforce represents seats all around the country and will champion ideas to boost Britain’s lagging areas, including some deprived parts of the North West to ensure that everyone has the opportunity to make the best of their talents, no matter where they are from.

The Taskforce is working with the thinktank Onward which has today produced a report “Measuring up for levelling up.” which looks at how government can best measure progress on levelling up, and examines how the economy has been performing in different parts of the country over recent decades. Together they want to develop policies that work to support the young and old and those in urban and rural areas who feel that they have been neglected by Westminster.

The report reveals that:

The levelling up agenda has strong support in Warrington, and the important thing now is that we make it material for people’s lives as soon as possible, particularly in light of coronavirus pandemic.

This is what the taskforce is all about, and here in Cheshire we already have one of the most productive local economies per person in the entire country, producing 25% of the North West’s total manufacturing output.

And whilst we do need to encourage more investment and enterprise, we also need to tackle disparities across the town, in terms of wages, opportunities and access to vital public services like a new hospital.

I want to raise people’s living standards across all parts of Warrington South, through bringing more jobs in through the Government Kickstarter scheme, as well as championing Warrington to be the first all-electric bus town, improving our local connectivity and allowing people to move around quickly and easily. We can’t have any barriers to someone’s ambition.

This has always been a priority for me and by joining this taskforce I want to bring further pressure to bear to make it happen. The coronavirus crisis has only made the case for levelling up stronger and we need all parts of the town firing on all cylinders to get the economy going again.