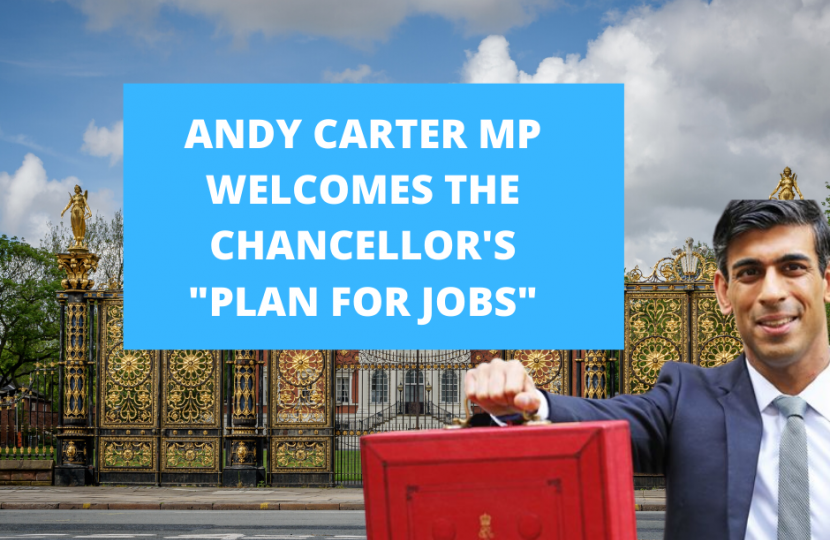 Andy Carter MP has welcomed the Plan for Jobs set out by Chancellor Rishi Sunak on Wednesday (8 July), saying it provides much-needed support to businesses and young people across Warrington South.

More than 13,000 jobs in Warrington South have been supported through the Coronavirus Job Retention Scheme, allowing employers to put workers on furlough while the Government supports their wages.

The Chancellor has now set out the second phase of the Government’s response, focusing on jobs by supporting people to find jobs, creating new jobs through investing in infrastructure and protecting jobs by revitalising the hard-hit sectors upon which many jobs depend.

Employers will be encouraged to retain staff who have been on the furlough scheme, with the Government paying a one-off bonus of £1,000 for every employee who was furloughed and who is kept on until January 2021.

A temporary cut in VAT for the tourism and hospitality sectors from 20% to 5% will give a much-needed boost to some of the industries hardest hit by coronavirus, including many businesses in Warrington South.

A new Eat Out to Help Out Scheme, giving people up to 50 per cent off meals out at restaurants, pubs and cafes on Mondays, Tuesdays and Wednesdays in August.

Also included in the Government’s £30 billion Plan for Jobs is:

There are some really big steps here to help important parts of Warrington’s economy and to protect jobs.  From next Wednesday VAT will be cut across hospitality, accommodation and attractions from 20 per cent to 5 per cent for the next 6 months as well as something that has never been done in this country ever before – giving people up to 50 per cent off meals out, encouraging them back into restaurants, cafes and pubs. Anyone who eats at a participating business, Monday to Wednesday for the month of August, can receive up to 50 per cent off food and non-alcoholic drinks, up to a value of £10 per person.  It’s time to get out and support our local independent businesses.

Scrapping stamp duty on all homes under £500,000 to help the housing market and boost confidence will save the average Warrington house buyer £4500, I’ve already heard from local people who are delighted with this step.

I’m most pleased to see Rishi supporting young people by creating jobs and encouraging training. The Kickstart scheme will directly pay businesses to create new, decent and high-quality jobs for any 16-24-year-old at risk of long-term unemployment. There’s also big boost for the Apprentice scheme, providing £2,000 to employers for each new apprentice they hire aged under 25.